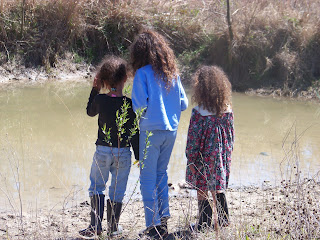 While I was walking down to the mailbox to get the mail, I was really enjoying the glorious nature that the Lord created. I could hear the birds singing and the squirrels scampering and Opossum drinking...the what? In the middle of the day a possum not good this is a nocturnal animal...really bad!
So I walked and then ran up to the house and called my country consultant Kim but her hubby happened to be home and He (a true Country Boy) and I carefully explained the situation to him and being a man of many words he said "Kill it". When he said it he sounded like a character off of an old western.
So I hung up and went off to get the shotgun. So here I am running out of the house and the kids barely paid attention to the woman in the ankle long skirt walking quickly down the driveway with the shotgun.
Well, long story short-- no more daytime Opossum....So what's next???
A homeschool lesson I went and gathered the girls and down to the pond we went. They investigated the critter from a distance and had a few things to say but PK concluded their conversation with "Hmmm his ears are bigger then I expected." ???
Finally, on the way back up the lane the girls picked up the shot gun shells and adorned their fingers with them! They will forever remember that Opossums are nocturnal (like raccoons & skunks said PK), that vultures eat dead animals and of course that Opossums have big ears.
Country Living, gotta love it!
RH
on Wednesday, March 11, 2009

Way to go, Kyle! You are one brave country woman.

I am impressed! I can just PICTURE you with your long skirt and that shotgun on your hip, Ms. Annie Oakley! Did ya hit him on the first shot?! ;-)