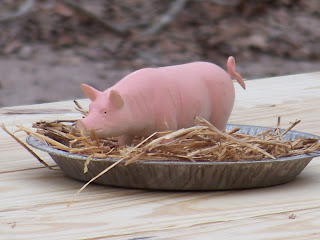 If you are looking for a stiff sophisticated party fun,
HONEY this ain't it!
As the table centerpieces should alert you! I just love them they match the invitations! 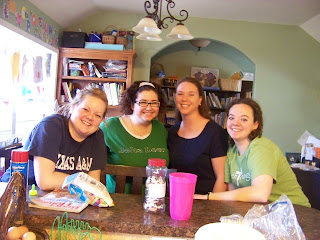 Last week we had our first Ho'down and this is going to be a continuing tradition because this was a whole lot of fun! This was so much fun it's a double slide show event!

As for vittals we ate Steak-Kabobs & burgers, beans, banana pudding, rolls. Yummy for my tummy! We had two families and 3 recent college grads and a whole lot of fun!

We divided into two teams: Brian, Fernando, Kyle, PC & PH vs Wayne, Katherine, Jessica, Justin & Parker. (Julie twisted her ankle preparing for Jen's 5K & Kim is just no fun!!!) So that being said the teams hid their flags and the games began. Here is a pictorial review....

It's not important but just so you know my team won!


There is one new rule in regards to capture the flag...we have to play it before we eat! After Capture the flag we had a water balloon fight which turned into a hose, bucket, cup & bowl fight....

Then we played hide-n-go seek in the dark. That is such a scary fun game as you feel around in the dark for people that are hiding. Kim said it was so alarming to be hiding and to feel the person come near you but you cannot see them until they touch you! Wayne won this game I couldn't find the boy anywhere...you'd think someone 6'4" would be a little easier to find!

This is especially excellent day for husbands as they love the competition and a chance to fight and win for something. It's a Wild Heart kind of day for all! So let us know in the comments if you are up for fun and games but we are not accepting wall flowers everyone has to play and laugh a whole bunch! (Oh, and I must know you or you must attend LHBC before I give you my digits!) The next game will be around lunch time in April!

DO YOU KNOW WHERE YOUR FLAG IS????

Hey Kyle!
Too much fun! :-) The last time we played capture the flag was out at Harris Ranch about three years ago when we had an over night camp out with several families from our congregation. (My team did not win - I still remember that! haha!) And hide and seek in the dark - also last time was at Harris Ranch about a year ago. I am NO GOOD at that - I scream and giggle constantly. Not very covert! ;-)
Loved the pictures. :-)

We play Hide-and-seek in the dark when we have our friends over, We have so much fun playing on 7 acres! We normally all chicken out on the 3rd game, HA HAHA :)