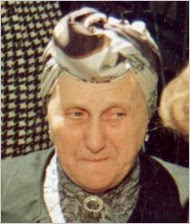 " God values children, and so should we. He calls children a “reward” (Psalm 127:3-5) and directs parents to “be fruitful and multiply” (Genesis 1:28) and declares this of those who are blessed with fruitfulness: “Happy is the man that hath his quiver full of them: they shall not be ashamed, but they shall speak with the enemies in the gate” (Psalm 127:5)....If you have attended my talks in the past, you may have seen me put up a graph that shows that if a couple and each of their children in succession have 8 children, that in 4 generations, they will have 4,096 offspring, and in 8 generations, they will have 16,777,216 descendants.
The New York Times has just highlighted the fruitful matriarch, Yitta Schwartz, a Hungarian Jew and Holocaust survivor, who, when she died last month at age 93, had more than 2,000 descendants. An amazing story!
God Said Multiply, and Did She Ever By Joseph Berger
The New York Times
WHEN Yitta Schwartz died last month at 93, she left behind 15 children, more than 200 grandchildren and so many great- and great-great-grandchildren that, by her family’s count, she could claim perhaps 2,000 living descendants.
Mrs. Schwartz was a member of the Satmar Hasidic sect, whose couples have nine children on average and whose ranks of descendants can multiply exponentially. But even among Satmars, the size of Mrs. Schwartz’s family is astonishing. A round-faced woman with a high-voltage smile, she may have generated one of the largest clans of any survivor of the Holocaust - a thumb in the eye of the Nazis.
Her descendants range in age from a 75-year-old daughter named Shaindel to a great-great-granddaughter born Feb. 10 named Yitta in honor of Mrs. Schwartz and a great-great-grandson born Feb. 15 who will be named at a bris on Monday. Their numbers include rabbis, teachers, merchants, plumbers and truck drivers. But these many apples have not fallen far from the tree: With a few exceptions, like one grandson who lives in England, they mostly live in local Satmar communities, like Williamsburg in Brooklyn and Kiryas Joel, near Monroe, N.Y., where Mrs. Schwartz lived for the last 30 years of her life.
Mrs. Schwartz had a zest for life and a devotion to Hasidic rituals, faithfully attending the circumcisions, first haircuts, bar mitzvahs, engagements and weddings of her descendants. With 2,000 people in the family, such events occupied much of the year.
To read the full story, click here.
Just imigaine if faithful Christians obeyed God's command of fruitfulness began to produce generations of faithful Christians.
Article from VF
on Thursday, March 04, 2010