Okay folks this is the great Iranian criminal Youcef Nadarkhani  he is in jail in Iran and has been given a death sentence. The unspeakable crimes that he committed are as follows.... 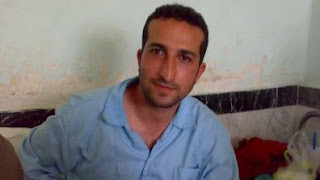 he dared to assert his religious freedom as a Christian in Iran.

As a result he".... was arrested in October 2009 after he protested a government policy that required children, including his 8- and 9-year-old sons, to study the Quran in school. Nadarkhani told school officials that the Iranian constitution allows for freedom of religious practice. As a result of his protest, secret police called him before a political tribunal and arrested him for protesting. The charges were later amended to apostasy and evangelism of Muslims." (from www.persecution.com)
Really? Yes, he is in jail with a death sentence because as a Christian he didn't want his children to study the Quran. There is no tolerance in Iran and many of the countries in that region, don't be fooled.

I cannot sit and pretend that Christians are not being persecuted. And just like you I'm pressed for time with hubby, kids, school & activities. So we subscribed to Voice of the Martyrs and they keep us informed and we pray. We are going to have to do more, even though it feels like I'm trying to empty out the ocean with a teaspoon. My eyes are open and I cannot now close them to what I know.

Here is the e-mail address (prisoner alert)  so we can contact the Iranians and let them know this not okay! That we see them and we know what they are doing and they cannot hide the ugly truth of it.  I know we cannot all react to every single thing that comes accross our computer screen, e-mail or Facebook. Plus, many of you are already deeply involved in a cause, in a person or in a struggle but if you aren't maybe you could consider giving some of your time to Pastor Youcef. This is gospel stuff this is it right here before us.

Here is the the update from Voice of the Martyrs latest update from Fox News
on Sunday, March 25, 2012